Blog Tour: Underneath Everything

Mattie shouldn’t be at the bonfire. She should be finding new maps for her collection, hanging out with Kris, and steering clear of almost everyone else, especially Jolene. After all, Mattie and Kris dropped off the social scene the summer after sophomore year for a reason.
But now Mattie is a senior, and she’s sick of missing things. So here she is.
And there’s Jolene: Beautiful. Captivating. Just like the stories she wove. Mattie would know; she used to star in them. She and Jolene were best friends. Mattie has the scar on her palm to prove it, and Jolene has everything else, including Hudson.
But when Mattie runs into Hudson and gets a glimpse of what could have been, she decides to take it all back: the boyfriend, the friends, the life she was supposed to live. Problem is, Mattie can’t figure out where Jolene ends and she begins.
Because there’s something Mattie hasn’t told anyone—she walked away from Jolene over a year ago, but she never really left.
Poignant and provocative, Marcy Beller Paul’s debut novel tells the story of an intoxicating—and toxic—relationship that blurs the boundary between reality and fantasy, love and loyalty, friendship and obsession.

I’m not really sure I liked this book even by the end. Mattie was a character who was interesting, but I did feel like she was weak and easily led. While I could sense the almost hypnotising draw Jolene had to her, I didn’t really like or trust her even when it seemed like she and Mattie might be on their way to repairing their relationship.

I liked the friendship between Mattie and Kris and I thought that, despite certain things revealed later on, Kris really did care about Mattie. I would have liked to see more of her during the book, but the interactions she did have with Mattie were interesting and it was nice to see that she did have an end goal.

I really wasn’t sure what Jolene’s end game was. There was part of me that wondered if she even was a person… since when she appeared, the writing seemed to take on an almost dreamlike quality. The parallels between her relationship with Mattie and her relationship with Hudson were interesting to see, such as the fact that both of them seemed to be obsessed with Jolene the moment they allowed her into their lives.

I did like seeing Mattie’s relationship with her parents and brother, though it did get a bit confusing with the constant switching between the present day and what had happened in the past. I also thought it was good to see how all of them did have problems with their families and personal lives… even Jolene.

It was interesting to see the way Mattie almost slipped down to rock bottom and how she was affected as a result. The first person POV allowed me to understand her and I found it really easy to understand how she was feeling most of the time. There was a lot of tension in this book and I was drawn in and able to keep on reading, despite the negative feelings I had while reading.

I don’t think I’d read a sequel to this book, even though it would be good to see Mattie grow into her own person. I would be willing to check out other books by this author in the future, though.

Follow the Underneath Everything by Marcy Beller Paul Blog Tour and don’t miss anything! Click on the banner to see the tour schedule.

Marcy Beller Paul is a young adult author, former editor, and full-time mom who still has all the notes she passed in seventh grade (and knows how to fold them).
She graduated from Harvard University and lives in New Jersey with her husband and two children. Underneath Everything will be published by Balzer + Bray, an imprint of HarperCollins, in Fall 2015. It is her first novel. 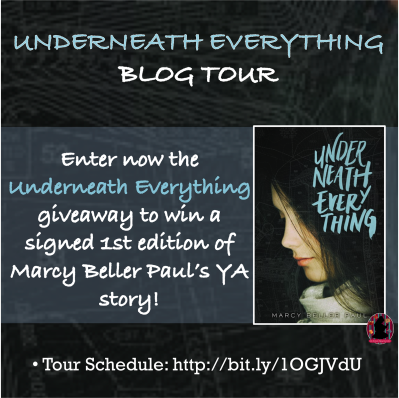