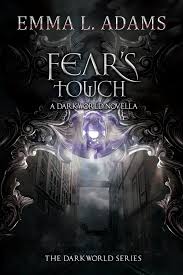 I’d give this novella 3.5 stars. Although I found the plot fairly intriguing, I did think that too much of the story’s events were summarised at the beginning of the story. It would have been nice to see more of Claudia’s interactions with her parents and some of her learning about her abilities.

I did find Berenicia to be an intriguing character, even though I couldn’t understand why she was so hostile most of the time. Even by the end of the book, it didn’t make it clear why the demons were after only her.

It was interesting to see Claudia also trying to learn about the history of the society, though I was really confused about why they had the registry in the first place. I really didn’t like Jude as a character and I felt he fell really easily into the trap of a two-dimensional villain.

I liked the hints of the society and it would have been good to learn more about the world. It was nice to see Claudia’s interactions with the other students and I was a bit amused by one of the guys she met. Although he came across as a thug to begin with, I thought he was shown to be a character with more depth than he first appeared to have. And I did find him to be a bit amusing at times.

I would have liked a bit more detail about the university and how the students end up joining. I also would have liked to see more of Claudia’s flatmates. I do have to say… Claudia has a lot more patience than I would have with certain characters.

This novella was really easy to read, but I felt the storyline and characters weren’t expanded upon. While this could be because I haven’t yet read the other books in this series, I do think the world could have been explored more than it actually was, especially in regards to the other characters’ families and the fortune-teller. I found her really interesting and would have liked a bit more detail about her.

I do have the other books on my Kindle… and I am hoping that the next books will have more details on the world and the characters.