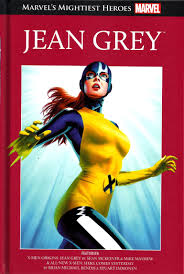 It was interesting to have the opportunity to see Jean Grey’s origin story, even though it did contradict the other two origin stories (so far) that I’ve seen of her. I thought that both sets of comics were particularly dark, with a more computer graphic type feel to them.

The first comic was particularly creepy, but it did make me feel very sympathetic towards Jean. I thought the style of the comic, despite it being really dark, was really easy to follow. Her mental image of Annie was especially creepy.

While it was good that the first comic focused primarily on Jean, I liked the fact that the second set of comics also involved many of the other characters… though I had a strong dislike for Cyclops in that time. I liked the opportunity to see the X-Men from the past come forward to the present time… but a lot of the comics made me feel really tense while I was reading.

Despite the seriousness of the second set of comics, I found myself laughing outright at the two Bobbys interacting with each other. It was also good to see the differences in maturity with the different versions of the characters… though I found it really hard to believe that Hank from the past was only twelve years old. He came across as much more mature than I would have expected from that.

I really did like the artwork in both of these comics, though the second set was a bit difficult to figure out which panel came next. There was a lot of detail involved in the second set of comics especially.

I would have liked to see what was going on with more of some of the other characters. I had some questions about who was missing in the future, though. I couldn’t tell all of the details about who was meant to be doing what, there was so much involved.

I was very disappointed in Cyclops, since he changed so completely from his original incarnation. It was nice to see Jean having to deal with developing her powers so early on… and I would definitely be interested in seeing what else will happen with them. Preferably a redemption-arc storyline. Plus, there are some intriguing elements about Jean’s history I’d like to read about.