Synopsis:
Embattled by an uncertain future, Gabriel Adam is now slowly succumbing to the powerful ring that he credits with stopping the demon sent to Earth to start the second war between the light and dark realms. As his health fails, his feelings grow for his archangel friend Micah. With the inevitability of his future ever nearer, he wonders if time is left to rekindle what they once shared.
But a darkness is growing in Istanbul. Lilith has used her alluring beauty to manipulate Simon Magus, the new Turkish president, into giving her great power. Wanting only to reunite with her one true love, she seeks to find seven ancient vials and pierce the veil that separates the dimensions, unleashing hell upon the Earth.

Having read the first book in this series, I was happy to be able to have the opportunity to read the second… and it did succeed in drawing me very easily back into the world Gabriel is caught up in.

While I still didn’t really like the romance aspects, it was good to see that Micah attempted to be realistic about her and Gabriel. I liked seeing a bit more of Gabriel and his father… though it would have been good to see more of him interacting with some of the other characters, since some of them were a bit difficult to picture in my mind, due to there being so many extra characters.

It was good to be able to learn more of the split in the realms and the past between the angels and the Fallen. While I didn’t like Lilith’s character, it was interesting to see her as more of a well-rounded demon. In some ways, I felt sympathy for her… I just thought she hadn’t really helped herself, though.

In some ways, parts of this book were especially creepy… particularly towards the end. There were some really good descriptions in the narration and I found myself wanting to reach in and protect the characters… or at least stand with them. And I did have a lot of sympathy for Gabriel, due to the effects the ring were having on him. I liked the fact that it was more subtle at first, only to suddenly become much more obvious by the end of the book. I did find myself questioning why a weapon like that had even been created, though.

I did like Arafot’s character, even though he seemed to be hiding things and not telling Gabriel and Micah everything at first. It was also interesting to see Micah coming into her own as the archangel… though I didn’t see a lot of that same evolution in Gabriel’s nature.

While the book did end on a bit of a cliffhanger, it has triggered my interest in reading the next book… and for all that I did figure something out before it was revealed, I’m still confused and want to get an explanation. 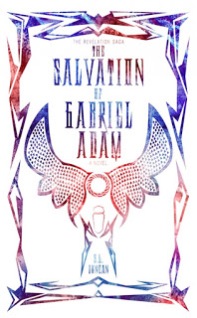 Follow the The Salvation of Gabriel Adam by S.L. Duncan Blog Tour and don’t miss anything! Click on the banner to see the tour schedule.

I’m a writer and traveler seeking stories from inspired locations – a connection of prose to place. The first book of my YA book series, THE REVELATION SAGA, releases 2014 from Medallion Press. I am represented by John Rudolph of Dystel & Goderich Literary Management.