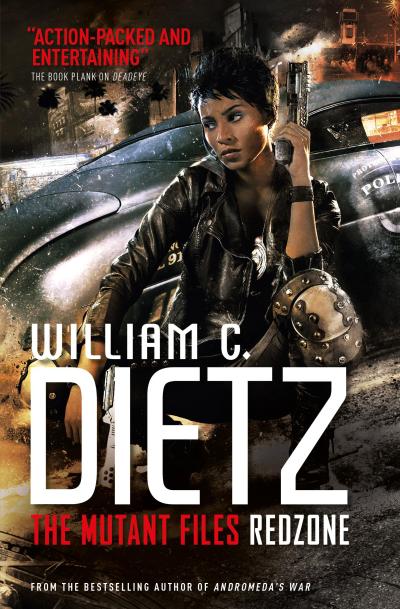 This is the first book in this series that I’ve read, but there was enough detail to allow me to follow the story without any problems.

I felt that this book was a good mix of genres. There were some science fiction elements, but a lot of action and very tense scenes.

I liked Cassandra’s character. I found her very easy to relate to and empathise with. I recognised a lot of things about myself in her… particularly in not wanting to get up in the morning; though I’m rarely late when I’ve made commitments, whether work or personal.

I was very interested in the details about the disease that caused the mutations. It was good to read about how society was divided between mutants and ‘normals’, to the point where mutants are kept completely separated to people who don’t suffer the effects of the disease.

I thought it was good to see that police work still seemed to operate the same as it does in the present. Cassandra took me by surprise when she punched out the reporter… but it as good to see her suffering the consequences of her actions, even though I did think she was let off easily.

There was a lot of action in this book and I did care about what happened to Cassandra. While I thought the romance was glossed over more than it should have been and there was too much summarising of the interactions between Cassandra and Kane, the romance didn’t seem to take over the book and have Cassandra care more about that than the other things that should have been important to her.

It was good to see what it was like for Cassandra after she entered the Red Zone. Even if I wasn’t sure how the disease was carried, I was still concerned about her safety… more so after what I saw her half brother and his half brothers were like. While James was intriguing and seemed to have some depth to him, I didn’t like him as a character. I would have liked to see more of Cassandra’s interactions with them… but I was on edge the entire time she was there.

There were some nice elements of foreshadowing and I felt the pace of the book really picked up later on. I found this book to be really entertaining and well-written… and I’d be interested in reading the other books in this series in the future.