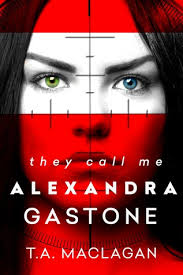 I found the concept of this book a really intriguing one. I was drawn into the storyline really easily and found it really engaging to read.

The first part of the story made me cringe. There was a lot of tension in knowing the violence that was about to occur, but it was good that the author left parts of it up to the imagination. Though that can be worse in some ways.

It was good to get bits and pieces of Milena’s past as the story went on. I liked the opportunity to see her interact with both Grant and Albert. There were some really sweet scenes between them, despite what her mission was.

I liked seeing Milena try to juggle her mission parameters with school and a boyfriend. There weren’t many minor characters who were fully expanded on, but those that were came across as really well-rounded, such as Milena’s friend outside of her life as Alexandra.

It was intriguing to see one of the operatives grow disillusioned with their organisation. I also really disliked the main leader of Perun. Even though there were times she came across as a nice person, it was clear that it was an act… though it really wasn’t clear why Milena was hated so much.

Although parts of this book were slow-moving, there were aspects that were really tense. I felt a lot of sympathy for Milena. I would have liked to see a bit more of her interactions with Perun agents, rather than having so many of those interactions glossed over.

I was a bit disappointed that this book ended on something of a cliffhanger, though I did find myself really wanting to read the next one and find out what will happen. This book was well-written and drew me in easily. It’s a good start to the series… and there are still many questions I’d like to get answered.