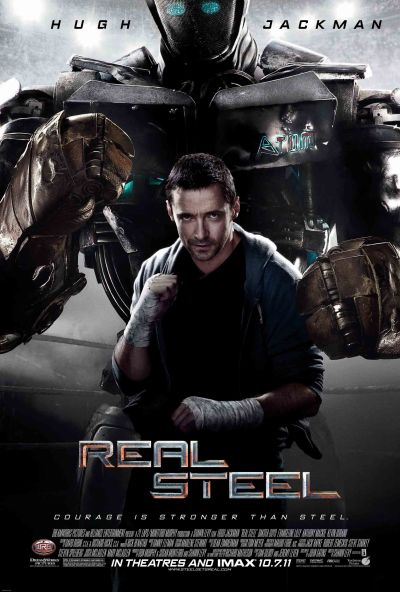 After watching the X-Men movies, I decided I really liked Hugh Jackman as an actor. When I originally saw Real Steel advertised, I decided immediately I wanted to watch it. And having just finished watching the movie again, I enjoyed it just as much the second time.

Personally, I like feel-good films. There were some elements of violence in this movie, but I found the character of Charlie to be a really intriguing one. It was interesting to learn of his history as a boxer… and see how desperate he was to make money and pay off his debts, even though everything he does just digs him in deeper.

It’s clear right from the start of the movie that Charlie doesn’t feel like he needs anyone. The only real emotion he demonstrates at first is to do with the robots he buys and fights. I couldn’t help feeling a lot of sympathy for Max, as he was dealing with the fact that his father didn’t actually want him around… that he was only with Charlie because his aunt’s husband had paid him money to take Max while they were on holiday.

I really liked the fact that this movie wasn’t just about the robots or other technology. Many of the minor characters were well-rounded and it was good to see the way people made money off of fighting robots. But I liked the personal relationships that built up in this movie. I especially liked the father-son relationship that formed between Charlie and Max, despite neither of them having met each other up till that point.

I thought it was interesting to see the type of technology that was built into the robots, such as the shadow feature and the voice command. The remote made me think of video games… only on a much larger scale.

There did seem to be a lot of similarities personality-wise between Charlie and Max. There were some really sweet scenes in this movie that I liked… as well as a lot that were really intense and kept me watching, my eyes all but glued to the screen, even though I had seen this before.

I was disappointed to be left with some unanswered questions at the end of the movie and there were a few disappointing elements about the ending. Even so, I felt this was a really good feel-good movie to see. The actors played well off each other and it’s a movie that’s stayed with me a while. It would be cool to see a sequel to this.