Venus Lionheart: The Witch and The God 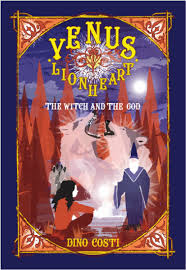 I found this book to be a really good read. I was able to put aside my personal beliefs as I read this and, as a result, found myself enjoying it more.

It was good to have the opportunity to see the action more or less straight away. I liked Venus as a character and although she did seem to accept things a bit fast, I did think it worked for the age she was. And it was good to see that Sebastian and Eric didn’t just believe things straight away and didn’t until they had proof.

I really liked Galahad as a character, though I would have liked to know if he was the same one from Arthurian legend. I thought it was a really unique idea to explain how Venus and her friends were able to interact with people who had actually been dead for a long time. And it was nice to see that Galahad was a really capable warrior and acted to protect all of them; not just Venus… even though he clearly wasn’t thrilled at having others accompany them.

I would have liked a bit more detail about how Venus had her abilities and if it was passed down to her genetically, as Eleanor’s seemed to be. It was also good to see the other organisation who Margaret worked for… even though I would have liked some more details about the different members of that organisation. And also why they seemed very closed to the idea of otherworldly phenomenon.

I thought the author did a good job of demonstrating the differences in ways of speaking the characters from the past had. For instance, Galahad had a very archaic way of speaking and I felt it really fit in well with his character. He didn’t seem to have much of a problem with modern things, though.

The characters in this book did come across as very black and white. Although reasoning was provided for the bad guys, I didn’t think there was much to ‘humanise’ them. I would have liked more well-rounded villains.

I would be interested in reading a sequel to this book in the future. It would be really good to see more of Venus and Galahad… as well as have the opportunity to travel back in time and see more of the history.