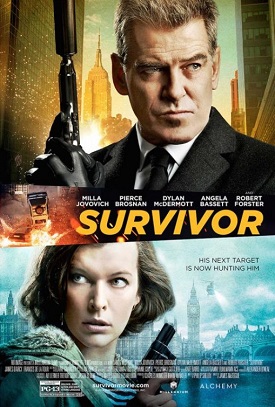 When I mentioned watching this movie to one of my brothers, he told me he thought it was exactly the same as many other movies that have come out. While I don’t quite agree, I do feel this movie, though entertaining, didn’t really have very many surprises in it.

Milla Jovovich is an actress I’ve seen in quite a lot of movies. Although the character she plays is obviously very competent, I didn’t feel there was enough background provided for her character. It was good to see the interactions between the characters, but although they did have friendships, I couldn’t quite figure out where the bonds came from. I’d assumed that Sam knew Kate from before… but then he implied that they didn’t… and that was confusing.

I thought it was good how the first scene did end up tying into the movie later on. I would have liked a bit more information about the Watchmaker… but I thought that Pierce Brosnan did a good job as the creepy assassin; even if there didn’t seem to be much depth to the character he played.

I did think it was good that at least two of the bad guys were given a bit of depth and reasons for what they were doing. As well as the two main actors I’ve mentioned, there were a couple of others I recognised as well.

I felt there was quite a bit of action in this movie and it didn’t really let up. Even though there were people dying, the movie had a low age rating and I felt the violence did reflect that.

It was a bit disappointing that many of the characters weren’t further explored and there was the sense that there wasn’t much loyalty between the people who were meant to be on the same side.

The film was entertaining and easy to watch, but there weren’t really any surprises or twists in it. It isn’t one I intend to see a second time.