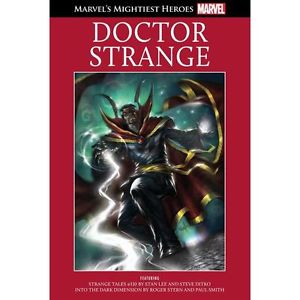 When I first saw Doctor Strange in one of the previous graphic novels, I’d assumed he was incredibly old. It was a bit strange to see that he wasn’t as old as all that.

Once again, it was interesting to see a character I’d already seen something of in the other graphic novels. I thought it was an interesting concept to have a hero who was entirely a magician… though he did seem capable when it came to having to physically fight.

It was really good to get looks at the other dimensions. I was a bit confused by Doctor Strange ‘shielding’ himself when he was entering the dark dimension, though. I found myself particularly intrigued by Umar’s story… and her relationship with Clea. I did feel for Clea, considering her father didn’t seem to like her very much.

I didn’t see a huge difference in the artwork in the two comics, but I still enjoyed reading both of the sets. I was intrigued by Dane’s storyline. It was an interesting concept to see him affected by the evil contained within the sword he wielded as the Knight. I did also notice a connection between Strange and Victoria… but that didn’t really seem to have anything come of it in this series of comics.

I noticed that the first comic in this graphic novel was a very short one, but it did do a good job of showing Strange and introducing his abilities. I also liked seeing some of the other characters that he had more than a passing connection with.

I liked seeing the hints of Clea and Strange’s relationship and it was interesting to see how the Outcasts were treated in the Dark Dimension. I also found it interesting to read the final comic in this collection… though it was a bit disappointing to see that the new character introduced (and I’m not sure who or what he was supposed to be) wasn’t explored in this. I might read some of the other comics involving Doctor Strange, since I think his storyline was one of the more interesting ones. I’m all for the characters who start off as arrogant jerks but reveal a heroic side to them. *Cough*Tony Stark*Cough*.