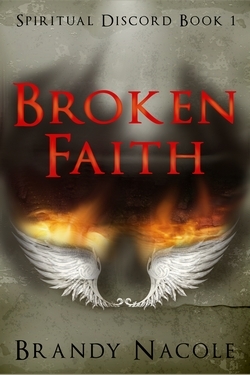 Although I do think that vampires and angels are currently over-used in fiction, I actually found this book to be a really intriguing read, with characters I did care about… even though the writing contained one of my pet peeves in that there were several different POV characters.

I found Sabrina to be a particularly interesting character. It was good to see that, although she was a vampire, she was fighting against her nature and trying to do the right thing. I liked her interactions with Kayson, too. Even though they both looked like teenagers, I felt the author did a good job of showing that they were both older than they appeared, in stark contrast to the characters who were actually teenagers.

I thought it was interesting to learn how the angels fell. I wasn’t expecting Kayson’s reasoning behind it, but when he did let it slip, I thought it made him a more interesting character. I didn’t especially like the hints of love triangles running through this book, but by the end, I was fairly satisfied with how things were resolved.

I also thought it was good to see that Kayson was in very real danger of his wounds overtaking him. The danger he was in felt very real… and I really cared about all that was happening to them.

I also thought that the reasoning behind Kayson’s connection with Sabrina came across really well. I could get behind the characters and the relationships between them. I liked how the reality wasn’t accepted quickly or easily by Emma and Briston. I did like their friends and there were some very tense moments in this book, especially towards the end.

I have the next two books lined up ready to read. I’m looking forward to seeing more of the world and the characters. For a book that could have been so cliched and ‘been done before’… I very much enjoyed this and found that it didn’t follow the normal formulae for young adult paranormal romance books. I’m hoping the next two will be better.

With thanks to the Fantastic Flying Book Club and Brandy Nacole