Blog Tour: The Gateway of Light and Darkness

The Gateway of Light and Darkness, by Heather Marie

About The Gateway of Light and Darkness:

The battle of good vs. evil wages on for Aiden Ortiz with this next installment of The Gateway series in The Gateway of Light and Darkness. With the Dark Priest defeated, and the Brethren of Shadows refusal to forfeit calling upon the Darkness, the Brethren are determined more than ever to discover a way to banish the Men of Light for good. Even if that means risking the lives of everyone they know to do it. And as the Dark Priest’s curse invading Aiden’s veins continues to take on a life of its own, he finds himself in a standoff between his own kind and the Brethren that want to recruit him for all the wrong reasons. With fellow Gateway, Julie Martin, and his best friends at his side, seventeen-year-old Aiden prepares himself for the battle of his life.

Protecting those he loves from the Brethren, and learning to put aside his differences for his father in order to learn the ways of the Light, Aiden begins to realize that the thing endangering them all might not be the threat of the Brethren alone, but the thing taking shape inside of him —readying to unleash itself upon them all.

I have read the first book in this trilogy… though not the third… so I recognised many of the characters in this final installment. There were a few who were new to me, but I still found it easy to relate to them.

I did find this book a really easy, enjoyable read. Aiden was a character I could really empathise with. Even though I hadn’t read the second book, I didn’t have any trouble understanding what had happened before.

It was interesting to see Aiden’s parents and his relationship with them. I would have liked to see more of Michael and Aiden’s mother interacting. I would have also liked to learn a bit more about the origins of the Men of Light and whether they’re supposed to be angels… or something else entirely. I’m not sure I had all of those questions answered.

I quite liked Julie’s character and it was interesting to see the interactions between her and Justin. I also thought it was good to see the other characters through Aiden’s eyes… though I couldn’t help thinking he’d missed something that, to me, was completely obvious.

Although I didn’t think I would, by the end of the book, I found myself growing quite fond of Seth. Like Justin, he was a character who seemed to have a lot more depth to him than it seemed at first. I would have liked to see certain aspects of his personality and history explored a bit further.

It was also really cool to see Trevor and Evan. I was glad to see that Aiden didn’t lose his ‘normal-human’ friends and that they continued to support him even when what they were doing was dangerous.

Although this book did reach a satisfactory resolution, I feel that more of the world and characters could be explored. I’d like to read the second book at some stage in the future… but I’d also be interested in any further books exploring this world and the characters that populated it. Plus, it would be good to see the paths that certain relationships end up taking. 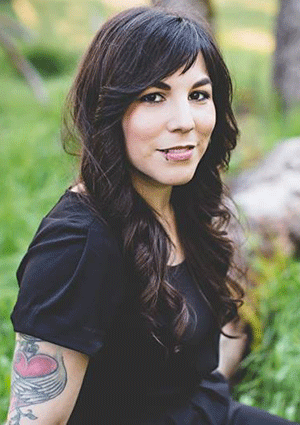 Heather Marie is the bestselling author of the Gateway series. She has been featured in The Huffington Post’s Diversity Month as a Latina author, and has been named a Latina author to watch for 2014 by Cosmo magazine. She lives in Northern California with her incredibly hard working husband, whom she loves ridiculous amounts. When she isn’t writing, she spends majority of her time reading or planning her next Harry Potter marathon. Heather has always been a fan of the darker side of things most people shy away from. With her love for the classic Universal Monsters, and the slasher films she watched throughout her childhood, she found herself fascinated by the macabre.

Though she hopes to expand her work to YA dark contemporary in the future, Heather considers herself a writer of stories that showcase the unknown, and at times, the harshness that is reality. She adores her troubled characters and her ghostly fiends, creating worlds that are both strange and beautiful. All of this with a healthy dose of romance, of course.