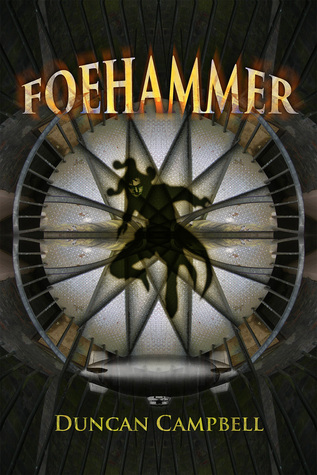 I’ve read quite a few zombie books to date, but I did find this one to be a more unique book. Although there wasn’t as much background as I’d hoped to the creatures involved (I didn’t learn about their appearances in history), I did find the idea behind them and the kind of mutations they could cause to be pretty interesting.

I also found myself really liking the characters in this book, even the ones I initially wasn’t sure about. The character I wasn’t as keen on was Cryboy. I couldn’t really understand his motivations… and I didn’t find him to be a particularly likable character.

I couldn’t say who was my favourite character out of the remaining ones. I liked Curtis, Jester, Jodie and Helga in different ways. Jester was a little hard to understand and there were a couple of times I wasn’t sure he was going to come through for the others. But although he came across as a bit of a loose cannon at times, I enjoyed reading about the way he, Jodie and Curtis worked together. I felt that the sense of camaraderie between the three of them came across really well.

One of the things I found difficult to understand was the AI and the factors that went into deciding who was likely to succeed in the missions. I could understand Jester’s and Curtis’ involvement… but not so much why it had to be Jodie, when I felt Helga was just as capable. I would have liked some more information about the factors that went into that kind of scenario.

The descriptions of the creatures was quite creepy, but there was little detail about the history and exactly why they couldn’t kill the creatures, other than what looked like guesswork with no evidence to back it up.

I did find it quite distracting to suddenly get flashbacks to Curtis’ past, seemingly completely randomly, and in present tense. Although I liked Curtis as a character and found his abilities very intriguing, I didn’t think that was necessary.

I still found this book to be an entertaining read and it was quick and easy. I’m intrigued enough to want to read more about these characters… and hopefully have some of my questions answered if a sequel does exist.