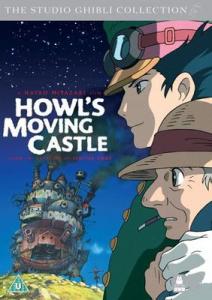 I have read the book that this movie is based on, but quite a long time ago. I also watched this movie ages ago and only recently decided to rewatch it.

Although this film is on the longer end, I didn’t feel myself getting bored as I watched it. I very much enjoyed the plot and the imagery throughout this movie. Calcifer made me smile a lot through this film and I enjoyed his bantering with Sophie in particular.

I did feel quite a bit sorry for Sophie. In many ways, I felt the curse she was under related to how she felt about herself. Even from the start, she clearly had very low self-esteem. At the same time, I did have a lot of respect for Sophie’s character, since she just got on with things and tried to make the best of the situation.

It was interesting to see Howl evolve from a self-absorbed wizard obsessed with his appearance to someone willing to fight for what he cared about. Unlike many films I’ve seen, I felt that the relationship between Howl and Sophie was given room to evolve and grow.

In some ways, I also felt sorry for the Witch of the Waste. I felt that her story arc could have been given a bit more expansion. The scarecrow made me smile and I liked seeing all of the friendships formed. I was a bit disappointed to see that Sophie didn’t give much thought to the family she left behind, though.

I really did like the animation in this film and I felt the voice actors did really good jobs. I didn’t even register that I knew who one of them was until I saw the ending credits.

This film is definitely one I’d watch again and I would definitely like to see more movies from this collection. This was a fun, magical film to watch and left me with a really good feeling by the end.