The Bitches of Everafter 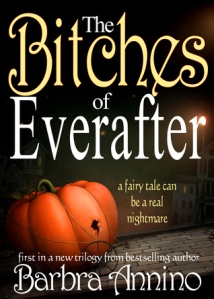 Although fairytale-based plots aren’t terribly unique, I did find this to be a really entertaining read. Parts of it made me think a little of Once Upon a Time, but it was different enough that, although it triggered thoughts of the series, I wasn’t picturing the characters from the show while I was reading this.

The idea behind this book was quite a unique one, though I did feel that the constant used of the word ‘bitch’ wasn’t necessary. There were times it felt like it was just used for the sake of it.

There wasn’t really any attempt made to hide the identity of any of the characters in the town, though I found it interesting that many of them had traits that were similar to their fairytale counterparts. At the same time, there were some very big differences to how I would have perceived the different princesses; such as Punzie being a stripper.

It was interesting to see the differences to the normal fairytales, such as in Bella’s story… and also Cindy’s. I would have liked to learn a bit more about their history and what the ‘true’ stories about them were.

I liked seeing Robin Hood and Tink in this book. It was interesting to see who the Judge was, though I didn’t really understand how she fit in and what her connection to Snow White was, even though it was mentioned in the book.

I thought the idea about the different nemesis was a pretty interesting one, but I was a bit confused about Bella’s. The other princesses had something I could recognise and their stories were at least similar to the legends I knew, whereas Bella’s came across as vastly different… though still really intriguing.

I thought the halfway house was interesting and it was good to see characters from other fairytales, too. I would have liked to know what happened to the other characters – such as Marion, who was mentioned but not shown much of.

The ending of the book was really intriguing and enough to make me want to read more. I would like to see more of the characters and the situation they found themselves in. And it would be good to know more about their pasts, too.