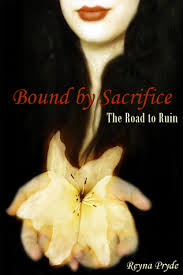 I have to say, I had some very mixed feelings about this book. I really liked the sound of it from the blurb… but as I was reading it, I struggled a lot to connect emotionally with Acelynn. It didn’t really help that there were continual references to how beautiful she was and how every man would stare at her. (There’s nothing wrong with having an attractive character, but it doesn’t need to stated repeatedly in the narrative and by the other characters).

I thought the mythos was quite interesting, but parts of it seemed a little bit random and I would have liked to see a bit more expansion. The romance aspects were interesting and the hero was a fairly original one. Unfortunately, I felt that the romance moved far too quickly and there wasn’t enough time spent developing the relationship before the inevitable confession. (And there was quite a bit of contradiction later on that I didn’t really understand).

I would have liked to see some more bits about the relationship between Cain and Abel. There’s very little background provided and I was disappointed that there were no questions asked about the history.

It was interesting to learn more about how Lilith created her creatures and how she used living beings as the basis… though I was a bit confused with the whole thing about the unicorns. It was interesting to see Lilith and Acelynn interact together and I felt that Acelynn’s feelings about Lilith were handled realistically.

I wasn’t too keen on the ending, either. I don’t think I’ll be reading the next book in this series, at least as it stands right now.