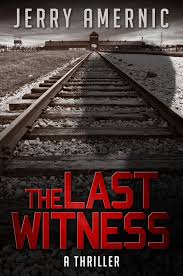 I found the idea of this book being about the last survivor of the Holocaust a particularly intriguing one. It was interesting to see that so many people had so thoroughly convinced themselves that the Holocaust never happened, especially since it’s known that there are people nowadays who think it’s a lie. Then again, there are people who don’t think humans really went to the moon. There was one quote in this book that drew a smile from me. Note that I might not be recalling the comments exactly, but this is the general gist:

“Were you aware that half of Americans believe we never went to the moon?”

“I don’t know anything about that.”

It is sad that I can see people turning a blind eye to the atrocities of the past. How can we learn from history’s mistakes if we try to pretend those mistakes never happened? I thought the author showed that theme particularly well.

I thought it was good that the author included flashbacks to Jack’s life. I did feel, at times in the flashbacks, that Jacob came across as an older child. His pattern of speech didn’t really seem like a four-year-old’s to me. At the same time, it was interesting to see the awful horror as he experienced it.

Another thing I found interesting to read was other people’s reasonings behind their views. I definitely didn’t agree with any of those, but the fact that the workings of their mind was shown helped me to see a bit deeper into their minds than I would normally with villains.

I also liked seeing about the leaps in technology and the fact that e-readers had all but replaced actual books was interesting, too. But I especially liked the way messages were left. And I couldn’t help feeling sorry for Jack during parts of the book, especially considering how many of the others spoke to him just because he chose not to stay silent any longer.

I personally don’t think we should forget the terrible things in the past, because I think that history is full of lessons that humanity shouldn’t ignore. Just because you don’t like something, that doesn’t mean it never happened.