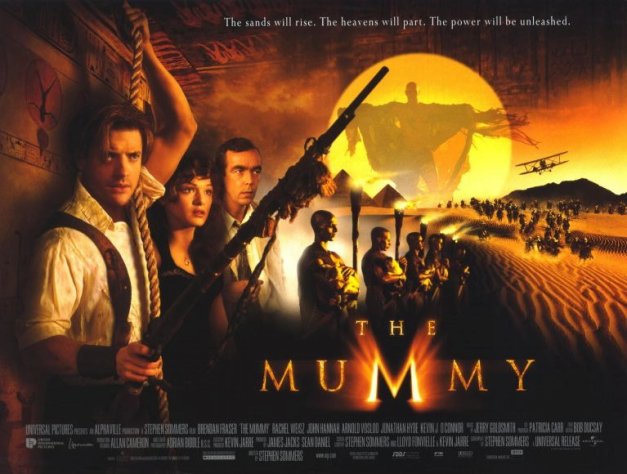 The Mummy is another movie I watched a long time ago. I remember I really enjoyed it a lot each time I saw it… and watching it again on television today was enjoyable as well, even if I did notice that a lot of scenes were cut out.

I think my favourite part of this movie was the relationship that formed between Rick and Evie. A lot of films nowadays just seem to include romance for the sake of it and that comes across as forced. I didn’t find that in this movie. I felt the emotions were real… and even though Rick was the typical kind of rogue, I especially liked him as a character. He and Evie played nicely off each other… and it doesn’t hurt that I especially like Brendan Fraser as an actor.

I’ve always liked learning about ancient history (a love that my niece seems to share with me), so this movie was really good for that. Although there were a lot of gory scenes in this film, I felt that it was more of a mix of genres rather than just horror.

Imhotep was an especially creepy character, though the first scene made me feel some sympathy towards him. I didn’t get to see much of his past, but his fate was a pretty awful one and made me cringe. I actually felt that the people making this film did a good job of knowing when to show the gory scenes… and when to leave it up to the viewers’ imagination.

There were a number of amusing moments in this film and I thought it was good that those came from the characters themselves, rather than more slapstick/crude humour. I also especially liked Evie’s relationship with her brother.

The atmosphere of this movie was really well-done as well, in my opinion. I felt that the lighting was used in good ways. It drew me in with scenes that creeped me out at times, while still keeping me engaged in the movie. I would definitely name this as one of my favourite films.