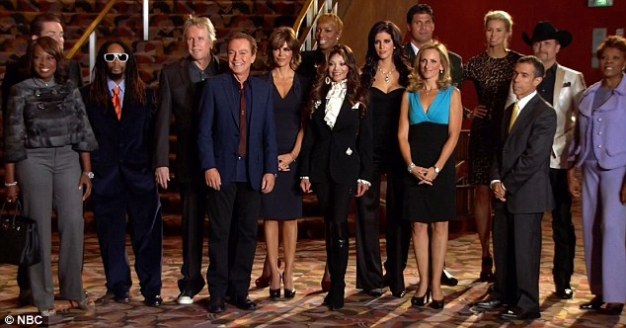 I tend to watch the UK Apprentice more than the US one, but I like the idea of having celebrities raising money for their charities in anything… and when I saw the original line-up for this series, I actually recognised a number of the celebrities involved.

With very few exceptions (maybe even just one), I noticed that the celebrities on the Apprentice had as little problem throwing each other under the bus as non-famous (before the Apprentice) contestants do. The one celebrity who refused to place blame on anyone else when she was project manager got a whole lot of respect from me in that episode.

I was a bit shocked by the way some of the celebrities tore into each other. There were a couple of shouting matches that made me feel the contestants weren’t being professional the way they should have been.

I also felt that there was a bit of discrimination going on here. I’m not going to go into details, but there were certain tasks where the men’s team were treated differently to the women’s. And there was one particular part that made me lose a whole lot of respect for one of the contestants in particular.

Through the course of the series, I felt the tasks were fairly interesting and it was good to see that there was a variety of different ones to showcase different abilities. For instance, I loved the ones that showed the celebrities being willing to poke fun at themselves.

Probably through the whole show, Marlee was my favourite to win. She wasn’t the only one who was passionate about her charity, but it was good that it was so personal to her. And I loved seeing her acting, too.

This show was entertaining to watch and there were times I could see how passionate the celebrities were about their causes. A few things happened that disappointed me… but by the end of the series, I felt that the winner had deserved to win. Sometimes it was drawn out and I didn’t always agree with who was fired… but by the end, I was happy with the result.