The Demon of Stonewood 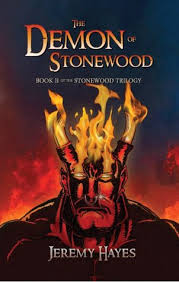 Having read book one in this trilogy, I was quite happy when the author kindly sent me a copy of book two to read.

It was good to see Harcourt again in this book. I liked that he came across as a much stronger, more confident character here. It was good to see him interacting with the other characters, but I couldn’t help feeling sorry for him, due to the fact that he seemed even more alone than in book one.

It was intriguing to see more of the Cult members, though I would have liked to learn a bit more about their pasts and how they became members. It was also really good to see more of the wizard in this book… and more of different types of magic that were in Stonewood.

I really didn’t like Garth as a character. At all. The Lich King was really creepy, but I would have liked to know more about his past. Still, I’m not sure I personally would have wanted to even enter the fortress… so obviously, Harcourt and his friends are much braver than I am.

The red dagger was really creepy when wielded by the Cult members… but it was even worse when Harcourt had it in hand. I was glad when he was no longer wielding it.

It was good to see more of the world outside of Stonewood, too. I liked Harcourt and Krestina. It was also pretty cool to see that Krestina was having the visions… though I did think that the priest in the temple should have listened to her.

I felt the book was really entertaining to read and drew me back into the world really easily. I did notice a quite a few repetitions of, ‘beautiful priestess’ or ‘beautiful assassin’, which I felt were unnecessary. I did think it was good that I grew to know some of the characters who ended up being in danger.

There is a third book in this trilogy and I hope to be able to read it at some point in the future. This book did end on something like a cliffhanger and it would be good to see how the characters cope with the events of this book.