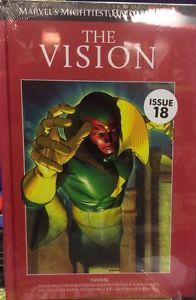 It has been a little while since I picked up one of the graphic novels from this collection. I seriously have a whole stack of them in my wardrobe and have only just picked it up again recently. (This is a normal thing for me. I do the same with DVDs of television series – I buy them, start watching, lose interest, start watching… rinse. Repeat).

I have to say, I didn’t know many of the superheroes from the Marvel world before the first graphic novel arrived and the Vision was one of those. Still, he was an intriguing character from what I did read about him and it was good to learn about his origins.

I felt that the comics included in this collection were really good ones. It was cool to see the two different styles of comics, with the first being a bit more tame in the artwork… while the second was more graphic and didn’t seem to shy away from showing the violence so much.

I’d already met Jan and Hank in other comics, so when the Vision first appeared and tried to attack Jan, I did care about what happened to her. It was interesting that the Avengers wanted to be allied with the Vision… at least most of them. Hawkeye seemed to be the only one who distrusted him for most of the first story.

I was quite intrigued by the Vision’s ability to change his density and it would have been good to see the explanation about why he was able to do that. His origins seemed to differ slightly from the first set of comics to the second and I would have liked to have a bit more explanation about exactly how that fit together.

I really liked the ending of the second set of comics, with Vision and Derek. I felt the emotions came through really well in both sets of stories, though. And although the artwork was vastly different, both sets were really well-drawn and I found myself sucked into the world without any trouble at all.

It was good to have the explanation about the Vision’s origins at the end of the book and his ‘life’ to date. I’ll be reading more of my collection eventually and the Vision is one of the heroes I look forward to meeting again.