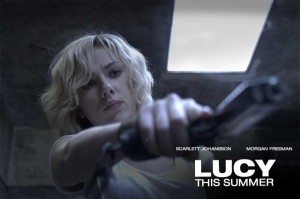 When I originally saw this film advertised, I thought it would be a sequel to Limitless. Although there was no obvious connection to that film, there were some vague similarities… but I personally don’t think it’s a rip-off, which was my original thought when I saw the trailer.

One of the things I liked about this film was the use of images from nature throughout. Those scenes were interspersed at, I felt, extremely relevant points where I could see the correlation.

I found the character of Lucy one to be easily relatable, even though I didn’t know a lot about her past. She seemed almost like a clean slate to begin with; a character that I, the viewer, could empathise with.

There were some scenes in this film that were quite tense, but others that were a bit more difficult to understand. The scientific aspects were explained to a certain extent, but by the end of the film, I wasn’t sure how some of the things Lucy could do were possible.

The idea of unlocking the full potential of a person’s brain is quite an intriguing one. The count-up to 100 worked particularly well, but a couple of things were really quite confusing.

There was a lot of violence in this film. There were some comedic moments, too, but a lot of them were directly relating to the violence.

I found the ending of the film to be a bit disappointing, though I’m not really sure why. I’m not sure I’d watch this film again, but I felt it was definitely worth watching at least once.