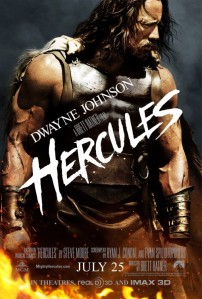 I’ve seen (and read) a lot of different versions of Hercules – or Heracles, as he’s originally known. This was a version I was particularly excited about seeing, but it was advertised a few months ago originally, so I assumed it wasn’t showing at my cinema… only to then have advertising start up again.

I felt this was an interesting twist on the story of Hercules. It was a film that kept me riveted throughout and there were quite a few good, big-name actors that I remember seeing in various other things.

It was good to see the friendship Hercules had with the rest of his little band of mercenaries. I particularly liked his nephew, though it wasn’t made clear exactly how Hercules had a nephew.

The training scenes were quite good in the film and there were some moments of banter that made me laugh. The main characters were believable and although quite a lot was changed from the original legend, I felt that it stayed true where it counted.

If you like the mythological fandom, I would definitely recommend this film as one to check out.