Captain America and the Winter Soldier 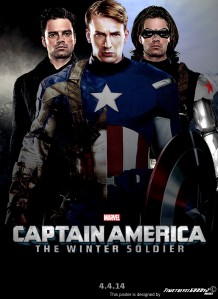 I did watch the prequel to this film, but it was before I started getting into superhero movies again, so I only watched it the once. Now that I’m getting more into those types of films, though, I decided I was going to see this one as soon as possible.

It was nice to see some of the other characters from previous films. One scene in particular was especially emotional. I’m not going to say which one it is here, but it was a scene that really affected me.

The action in this film was particularly good. I found myself really worried for the characters at times. There were a couple of things I saw coming, but it was still good when said things actually happened.

It was good to see more of Natasha in this film, though there seems to be a history between her and Fury that I would have liked to see further explored. I was also disappointed that Clint Barton wasn’t in this film.

I do think there was quite a lot of suspension of disbelief required. The film didn’t show much of people’s reactions to what was going on in the city.

I did watch the film in 3D, but I felt that it wasn’t necessary to make the film in 3D. It didn’t make a huge amount of difference and there was very little ‘jumping out’ of the screen.

I personally think this film is definitely worth watching. I do recommend it to people who like the superhero franchise and are okay with the plot not staying entirely true to the comics.